When I told people that we were off to the Countryfile Live Show most people asked how old I was and am I being made to go! Well, it was neither as I booked the tickets and it was me that couldn’t wait to go! I wanted to go last year but Blenheim Palace was too far and so when it was coming to York, I was super excited!

We decided to make a bit of a break of it and went in the caravan and booked into a lovely little campsite 10 minutes away. The tickets were fab as you could decide which of the 4 days to go and just turn up.  We decided to go on the Sunday and aimed for an 8:30am start as that’s when it opened but, as usual, despite being up before 6am we can never get out on time and rocked up at 9:30am. It was a very impressive drive up to Castle Howard and we were (well, me!) excited to get inside. 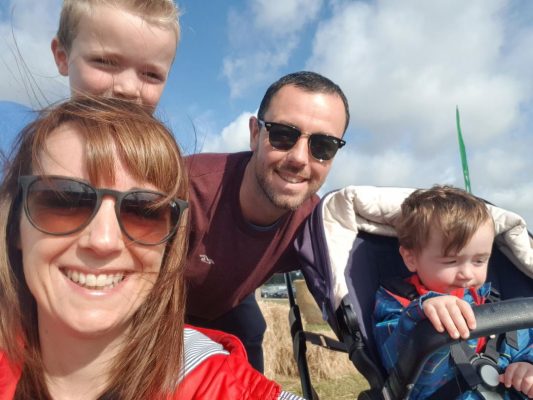 We bought a lanyard to find our way round and were wowed with how much was on offer. The boys started the day with a sausage butty cooked by Brian Turner (they didn’t have a clue who he was but, again, I was chuffed although I don’t eat sausages!) we were amazed at how many food places there where as you arrive, the choice was fantastic and lots for vegetarians and vegans too.

We headed straight for the coastal area where we got to have a go at fly fishing which Finn absolutely loved and didn’t want to leave. We were too late (despite it only being 10:30!) to book on for the water sports as we would have loved a go at the paddle boarding so that was shame.

From there we went into the Wildlife Zone run by the Yorkshire Wildlife Trust. The boys were in their element and we learnt so much at all of the different activities. They particularly enjoyed learning how to slow the flow of water to stop areas flooding.  It was very hands on, getting muddy which was a win win.  They completed their passport to a wilder future by getting all 5 stamps at each station and were pretty chuffed with themselves. It was great as they could both join in despite one being 7 and the other 1! So many people in this area commented on Sam’s dungarees.

Next stop was the National Trust 50 Things area and again, the boys were loving their little lives.  We had already been ticking off the 50 things to do before you’re 11 and ¾ at home and so got to tick off lots more here. Finn got to climb a tree using ropes and went so high up we couldn’t see him! He smiled a very nervous smile throughout but said he loved it! Sam got to play with mud and twigs whilst Finn made a boat and a bow and arrow, needless to say this was a fantastic area which all of us enjoyed.

When we got to the Village Green the sun came out and it all looked very beautiful and green! The maypole dancing was in full swing with the professionals getting the audience involved which looked lots of fun.  Pudsey Bear was here too for pictures, not that either of my two would have one! We got to enjoy a game of croquet with a lovely lady there to show us all how to do it. Her and Finn teamed up against me and Gaz and the lady, who was quite elderly, was such a laugh and was great with Finn. They put up a good fight but Gaz and I won – hurray!!

There were talks from the Countryfile presenters of the show throughout the day. We kept popping by to listen to various ones as the boys didn’t find these the most interesting as Finn put it ‘why are we just listening to people talk when we could be doing stuff’!! One talk was particularly good with John Craven and Adam Henson about how the world is talking all about the plastic in our seas and how to affects the sea life however it is even worse on land and how much it is damaging our wildlife. It was a real eye opener. We are very aware of the damage plastic is having on the world’s oceans but forget about the land we walk on every day, where our children play and where we all live our lives.

The o2 area was great, they had fab balloons made for them, went on the grabber machines and won a priority bag of goodies! We all got a free ice cream with our o2 Priority too. They had some great talks in their Rural Business Theatre too, unfortunately we didn’t get to catch many as again the boys wanted to play!

Finn loved the funfair and Sam loved seeing the animals in the Countryfile farmyard. We had a good look around the shopping areas and tasted some lovely pizza made in the pizza ovens on display. They cooked in 30 seconds! We met the lovely people at Tilda’s Tribe who told us all about their lovely goats and their goats milk soap. Sam has bad eczema behind his knees and when we told them this they recommended their honey and oat soap so we bought the big bar and carried on chatting about their Countryfile show experience and their company in general.  We enjoyed a drink at the Craven Arms whilst listening to the BBC Introducing Acts which was lovely and relaxing in the sunshine sat on a hay bale.

As we went on the last day the show was closing at 5:30pm and we were there until the bitter end still finding different things to see and do. It is not very often we can be somewhere for 8 hours solid without someone moaning and asking to leave but we didn’t have one single moan, groan or negative word all day (which never ever happens with our two!) I can’t express how much all four of us thoroughly enjoyed it all from start to finish. It wasn’t about being old and watching people talk about how much they love sheep and cows (which lots of people thought it was going to be like!) it was fun, muddy, creative and something really different that we hadn’t done before. We will definitely be back to the Countryfile Live Show next year and I can’t wait!